The Capsule That Does It All

You can have your arguments about the dangers of sugar, the problems caused by gluten, the merits of vitamin D, or any of the other things dietitians or armchair nutritionists routinely argue about. All of that stuff is important, but none of it’s as fascinating or consequential as the burgeoning science of polyphenols.

As a reminder, polyphenols are plant metabolites that generally protect plants from ultraviolet radiation or attack by pathogens. Historically, they were only thought of as plant chemicals that gave a particular plant a bright color, or something that caused plant-derived foods to have a particular flavor or smell.

We wised up in the latter part of the 20th century, though, when we started to recognize them as chemicals that could radically alter human health in multiple ways.

Although the science behind them is still in its infancy, we’ve begun to isolate and understand the power of individual polyphenols in human health. Among those that have attracted the most attention (and research) is resveratrol, a polyphenol that occurs in high concentrations in grapes, apples, blueberries, plums, and peanuts.

Athletes may know the compound for its ability to raise testosterone levels, lower estrogen, reduce fat storage, or how it makes young muscle cells grow longer and thicker, but a new paper in Food Science & Nutrition describes, in exhausting detail, a long list of resveratrol’s other abilities.

Following are some of the highlights from the paper:

A number of studies have shown the polyphenol to be anti-atherosclerotic, anti-hypertensive, anti-myocardial ischemia, anti-stroke, and anti-heart failure in general. It does all these things by increasing the bioavailability of nitric oxide (NO), positively affecting lipid profiles, and being a powerful anti-inflammatory.

One of the contributors to Alzheimer’s is an excessive production of Reactive Oxygen Species (ROS), and resveratrol has been shown to weaken the damage from ROS, in addition to having anti-amyloidogenic properties (i.e., helping prevent the plaques that are a hallmark of the disease).

Resveratrol has been shown to inhibit cancer cell growth and apoptosis (cell death). It also protects against DNA damage that may lead to the development of cancers.

RESVERATROL FIGHTS A WHOLE BUNCH OF OTHER STUFF, TOO

Numerous papers have shown that resveratrol, in addition to treating the primary diseases that afflict man, also shows considerable promise in treating other diseases like Parkinson’s, kidney and liver disease, cataracts, glaucoma, and diabetic retinopathy, in addition to having anti-pathogenic properties.

WHAT ELSE DO I NEED TO KNOW ABOUT RESVERATROL?

As with most polyphenols, it’s hard to overdose on resveratrol. The only known negative side effect reported from resveratrol use was diarrhea, and those were isolated cases.

While absorption is often a problem with polyphenols, resveratrol has a relatively healthy absorption rate of about 70%. However, bioavailability of the compound can still be low because of its rapid metabolism in the intestines and liver. That’s why taking it in supplement form is better – specifically, one that’s done something to increase bioavailability.

Case in point, the product Rez-V™ contains pure resveratrol that’s dissolved in lauroyl polyoxyl-32-glycerides, aka gelucire, a mixture of glycerides and polyethylene glycol esters that enhances absorption of the polyphenol. 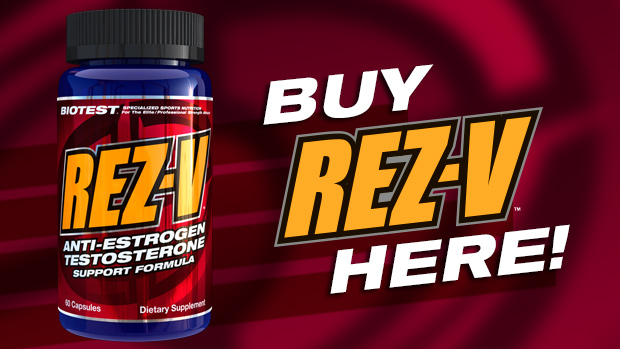 No one’s really sure yet about exactly how much resveratrol you’d need to achieve therapeutic results. However, it appears that 200 mg. a day (assuming a high bioavailability) would work for general health purposes, while doses of up to 600 mg. a day might be necessary to raise testosterone, lower estrogen, increase muscle fiber size, or have any effect on the diseases/conditions listed in the research paper described.